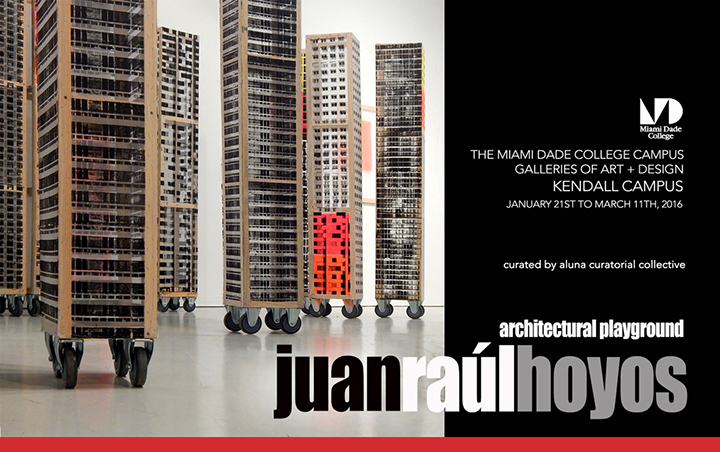 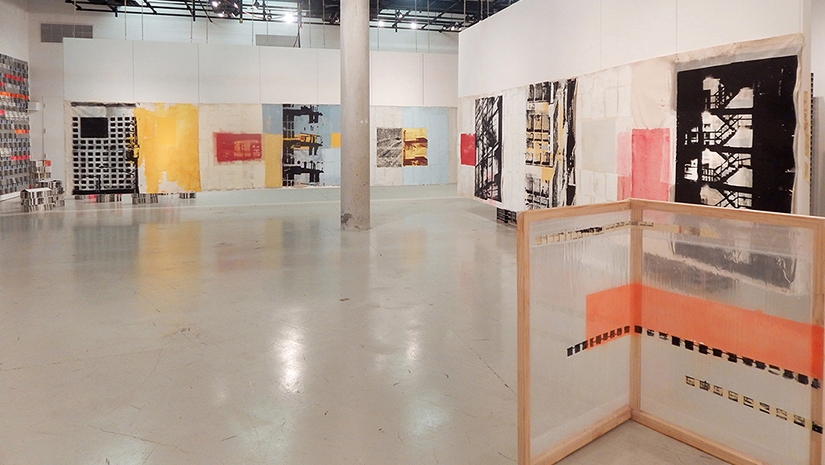 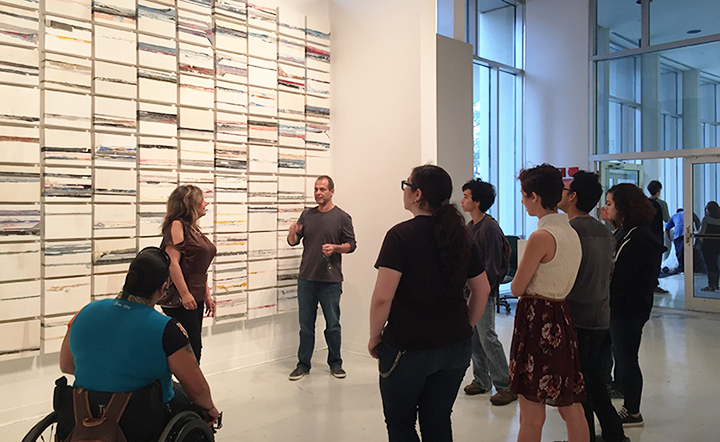 When, by the end of the 50s, Bernd and Hilla Becher documented in black and white photographs the German factories’ “typologies,” in which several variations of a single sort of industrial structure were represented, they were actually making the archaeological work of an era that was coming to an end. Those powerful images, raised out of a quest for a New Objectivity, traced the order of the past. Since the beginning of the new millennium, Juan Raúl Hoyos (Colombia, 1962) has been capturing buildings that are being built or demolished between his house in Downtown Miami and his workshop in Little River. The photographic works and mixed media graphics with which he documents his daily transits do not posses that aura of distance that characterizes the Becher’s typologies. Rather, they are contaminated by the color stains of the urban codes and the everyday dirt, and instead of looking backwards, they foretell what’s coming. What’s more: They contain visual spaces that can be compared to the existential emptiness that peeks amongst the proliferation of tall residential boxes, ever more uniform, ever taller and tighter, ever more oriented towards a serialized life, homogenous and lacking playfulness. Juan Raul Hoyos’s Architectural Playground exhibition registers the unstoppable repetition of cubes that in Le Corbusier’s failed dream should have humanized communal life. It also acts as a creative exercise that suggests how to open ludic and imaginative gaps to create disruptions within the homogeneous order that extends with the voraciousness of capital.

Critic and curator Gean Moreno warned us in an acute and critical way how while Hoyos apparently camouflaged “the metric standardization and modular logic” that governs the city, he was “registering the sped-up gentrification of the 2000s, collecting evidence.”

One can almost begin to sense that these stacks of boxes, these buildings, are less about specific architectural bodies than about the new urban space around structures–a space that is not just the emptiness between buildings, but the charged field of forces and intensities that exists between them; a field of heterogenous flows that impinge upon, when they don’t altogether structure, the buildings that we, conceptually moored to another age, still unimaginatively think of as the city.

Hoyos’s continuous and coherent investigation, articulated in his own daily Miami transits, departs from photographic documents that reveal the standardized order of an overwhelmed urban growth that resolves itself, as he warns us, with “the application of a general formula which might have more to do with ‘dwelling’ than ‘inhabiting’. From there, via a process of transfer and graphical interventions made on canvas and other ordinary materials – kitchen paper, boxes, framed silks, he sets forth a series of ludic visual proposals which keenly enhance mental insurrections, means of non-compliance for the urban dweller.

In the pieces that compose the “Reordenamientos” series, a difficult to translate term into English, as it would translate as “Order alterations” or “Put another Way of Order,” his intention is that of building an immense line of large canvases that somehow reproduce the vast “painting” of the metropolis around us. Via silk screen printing processes, Hoyos prints everything from photographic panoramas to very close-up exterior and interior (taken from outside) shots of the buildings under construction or facing demolition. These matrixes set some distance from the Beecher’s uniform focus: Hoyos is like a “living walking lens” and constantly changes his angle of vision and the depth of his focus field. He is an eye that can see the geometry of the inhabited world’s “containers” so closely, that sight cease to recognize the figurative shape, and is tricked into seeing it as a non-referential abstraction that in itself is just another approximation to the city. His photographic images, projected in layers, fragmented, shifting general construction planes with details on the concrete captured with unusual proximity, decompose the order of the urban landscape, and give place to a sort of mixed media paintings that incorporate graphic processes with a color palette taken from the metropolis themselves.

Given the above, he usually uses the maximum contrast, which is not black and white, but black and yellow – “it impacts the brain in an even stronger way and that is why it is used in pavement” he says, – and he also dyes with colors extracted from the industrial safety color codes or those of urban signage – such as fuchsia and fluorescent orange or red over white – the large canvases of the installation arranged and thought as a great enclosing tape: “Reordenamientos.” Each piece contains fragments and layers of urban shapes and tones, and a graphic process of positives and negatives, which are mingled into compositions that inevitably yield into empty grids, where color is an absence that invites the viewer to reimagine new structures.

In his work, Reordenamiento No. 31, Hoyos configures in parallel an ocean of urban print residues on silk title. The title is a number at random, since the series, installed like an abstract mural work, is a multi-sided configuration of 150 boxes, which may or may not be deployed in their totality, depending on the available space. Each white canvas has been intervened by the silk screening fragments that contain the dyed photographic impressions of the buildings captured during his transits. “Those fragments from the printed series are the pallet for my latest projects, and are in a way a log of my works, an urban notebook rigorously kept, as well as a reflection of a methodology, as I use everything: When the silks are no longer an agent for printing, I make interventions until they turn into an artwork.”

On the other hand, the beautiful quality of the display suggests, besides contemplation, a way of resistance against the systemic proliferation of urban growth: The potential for a change in its order. As a matter of fact, the complete series of “Reordenamientos” – both the big-format canvas he hangs as fragments of a tape under construction, as well as the small white canvas previously intervened with printed and colored silks has been thought as a display layout that, besides being adaptive to the display’s space and size in its dimensions, is opened to the active intervention of visitors in rearranging the pieces from their original places. All this, within a sort of “Happening” made in the presence of the artist and, in other works, as a part of a performance – moving the pieces at will – opened to an infinite number of possible displays. In doing so, the body of these works that have a starting point in the serialized and uniform architecture of the urban circuit, yield to an open and interactive work, as it holds the possibility for the spectator to physically activate the sense of change and mobility within his or her own structure.

In the case of the setting comprised by an open number of printed silk towers deployed as an answer to the space as an in-situ installation, not only do we find (again) the repetition as a resource and echo of the uniformity of urban architectures, or the use of the media for printing – silk – as the material for the work itself, but also the potential mobility, which this time is not only latent but also visible. Hoyos has deployed the towers on wheeled structures with which he builds an imaginary city that can echo modern Miami, but is also a futuristic projection of this and other cities such as New York, where there are currently traces of the multiplication of the Pencil-Thin Towers. Beyond the imaginative possibilities stated by the idea of nomadic or mobile towers the suggestion made is that of a transfer of the sense of gaming as a basis for another way of thinking. A conceptual possibility that so rightly inspires the title of the series and the whole exhibition: “Architectural Playground.”

Hoyos takes an accumulation of white mail boxes, a neutral typology common to the local commerce, as a starting point for his “Sintec” project (a paradoxical play of words for the Spanish “Sin tecnología” – without technology). He started collecting these from the trash and printing on them the gentrification patterns of Miami until they formed a succeeding city. After this, the work turned into a mailed piece of art, as many of these boxes traveled to other cities where the receiving parties inserted them within their own urban environments and returned a photographic record of this experiment. As a complement to these boxes, Hoyos transplanted that same principle of using printed architectonic structures and industrial safety colors superimposed over letter-sized sheets of paper to form a mural that is equivalent to, as he himself warns us, to the “skin of a city” that can nowadays be any contemporary metropolis. It is also equivalent to the observation of the urban geometrical layouts in which the day to day order of its inhabitants is inserted. As Moreno notes: “Before Sintec, one has to account for the invisible materialities that make up our cities, as they are irrevocably entwined with the art object.”

His collective works open a gap between the lucrative proliferation of the uniform, homogeneous metropolis, proposing an aesthetic revolt implicit in the principles of his “reordering.” In fact, these other ways of transiting and looking, this potential mobility that they suggest, give rise to the question of the relationship between everyday life and the proliferation of an urbanized social space under the grid of a fevered rush of construction that is de-humanizing in its effects. Juan Raúl Hoyos asks himself about the possibility of living life in a poetical way. He scrolls this idea before our eyes as a question that trespasses the mimetic representation of architectures, knowing that they hold warehouses of life, stored memories that cannot be separated from social history. In the end, his art unravels an analysis of that which is invisible in the metropolis and the intact potential of what can change places at a given moment. The artistic experience is stated from the possibility of creating emerging moments in the homogenizing orders, and imagining other ways of inhabiting contemporary time and space.