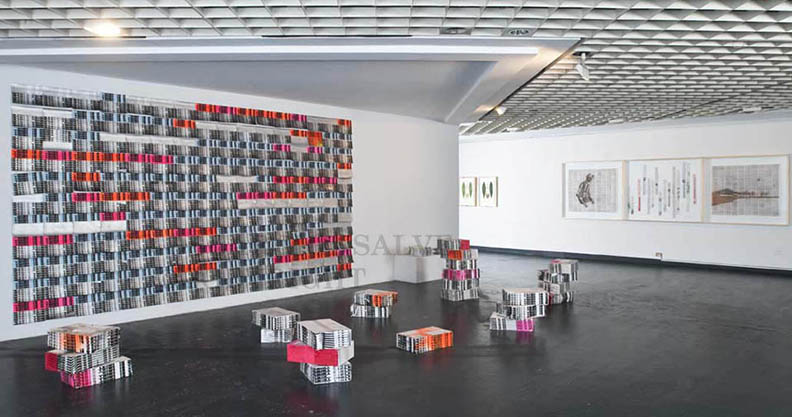 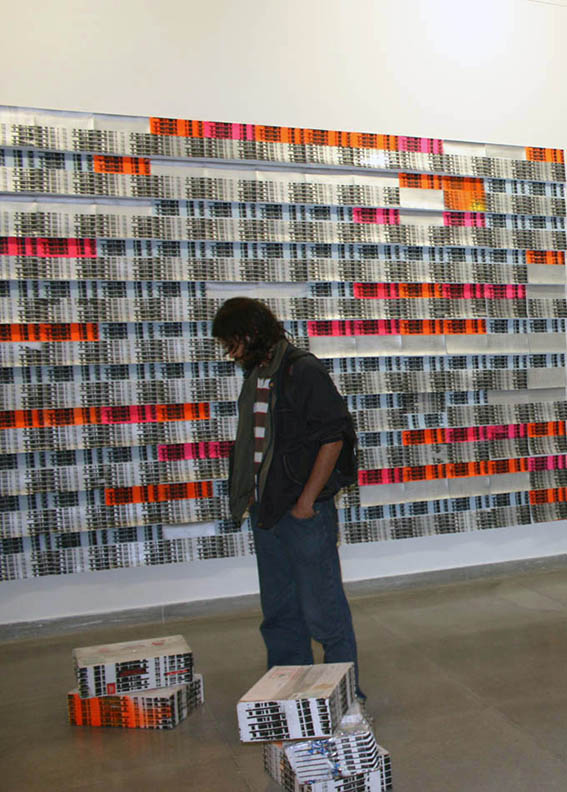 Juan Hoyos’ project, Sintec, 2009-2010, is deceptive. In its final form, it is no more than a series of stacks of white boxes. On the sides of these boxes the image of a sliver of a condo tower has been silkscreened. Seen this way, the boxes “add up” to buildings, to generic urban elements. They make up a squat and schematized section of a city. It’s a mimetic effort sifted through a sensibility at home in cheap materials (found cardboard) and mundane processes (silkscreening). It finds kin in the range of models that runs from the architecture school maquette to the Calder circus. But the project seen this way is also, in some way, not seen at all. This final form it takes is but a stand-in for its real, disembodied, and elusive core, for something in it that stretches toward the invisible or intangible while being forcefully present all the same. In other words, the project is everywhere but in these stacked boxes and the images they carry. While also being, of course, right there. It’s this oscillation between a final form and no form at all that begins to shed light on what is at stake in Hoyos’s thinking.

Hoyos began with series of used and empty boxes, found behind a local business–elements that had already been circulating through the city, coursing through its delivery infrastructures, adhering to the metric standardization and modular logic that governs so many of its products. These boxes carry all the secret information that makes the city efficient. After collecting these boxes in his studio, Hoyos decided to print on them visible traces of the city they help structure invisibly and silently, as they circulate and keep larger economies moving. So, Hoyos photographed the condo towers that began to appear during Miami’s most recent building boom. These images he turned into silkscreens and printed them on the collected boxes. Hoyos ended up with a series of disconnected layers that could be assembled into architectural models. In a sense, Hoyos was pulling in two directions simultaneously. He was registering the sped-up gentrification of the 2000s, collecting the evidence. At the same time, he was running this photographic material through the “cheapening” or popular process of silkscreening, tapping into the economies of the flea market, the independent record label, the disposable campaign t-shirt, the informal teenager-in-the-backyard attire company.

Before he stacked the boxes into “buildings,” Hoyos decided to circulate them again, to re-insert them in the city’s invisible infrastructures. He mailed out the boxes, thinking of the networks, staggering in their reach, he was plugging into. The receiver of box was invited to place an image of his or her own environment in it, and send it back. The invitation keeps the boxes moving through these dispersed infrastructures. They eventually to come full circle and are marked in such way by their trajectories that it would be increasingly difficult to talk about “the object” or “sculpture” and mean by these terms an artifact that was self-contained, autonomous, endowed with clear edges. Before Sintec, one has to account for the invisible materialities that make up our cities, as they are irrevocably entwined with the art object. On the one hand, there are the obvious traces of these realities and the ways in which they are embodied–images that register rampant gentrification, boxes that bear the marks of the postal and delivery systems. On the other hand, however, there are less tangible or representable things–the distances that these boxes travel, the circuits they used, the amount of energy and capital necessary for these circuits to exist and function. And even more may be “stamped” on them: forces and flows exterior, but not unrelated, to these infrastructures. Things like global information networks, transnational technological compatibility, banking structures that straddle the quaint and contained organization of the Nation-Sate, etc. At the very least a suggestion of these massive networks is woven into Hoyos’s cardboard buildings. One can almost begin to sense that these stacks of boxes, these buildings, are less about specific architectural bodies than about the new urban space around structures–a space that is not quite the emptiness between buildings, but the charged field of forces and intensities between them; a field of heterogenous flows that impinges upon, when it doesn’t altogether structure, the buildings that we, conceptually moored to another age, still unimaginatively think of as the city.