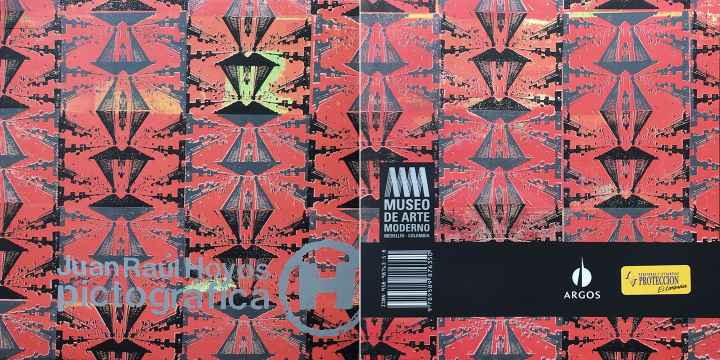 THE CITY IN ‘PICTOGRÁFICA’ CLEF

Miami makes up a new and revealing rendezvous for Juan Raúl Hoyos’ work. Even today it is unclear to me what made him settle in the Latin Capital at that very moment in 2001; yet, after having observed and studied extensively his work process, I do acknowledge the inﬂuence of Miami in his paintings. A new inquiry that got him to go over his logbook and take up once more past stories from those cities that he inhabited. There, the formal grammar of Juan Raúl’s work is loaded with plastic elements (in a double sense, whether aesthetic or born out of triviality): the transformation, the ephemeral, the summation, the trends, the repetition, the everyday nature of spaces and the conﬁguration of the places, the mirror, the modulation, the development, the density, all those elements portrayed on his paintings, taken to the limit of their optimum depletion, are the keys that give access to that “City in Pictográﬁca Clef”1, that is presented in the work this exhibition encompasses. “Pictográﬁca” was born half way through 2008 in Wynwood—known as the Art District of Miami (Fl)—, as a result of a long formal, conceptual, and an even more important experience-based exploration. To mention Wynwood previous to the arrival of Juan Raúl and a handful of pioneers that dared to enter in their midst, meant to speak about social marginality, the downfall, the abandonment, even misery surrounded by the typical opulence of “Sun City”, a product of migration and industry liquidation that took place in the late 90’s. And it was the artists, who, thanks to the empty spaces left behind by industry gave the district its new vocation. Row upon row of huge warehouses, laid out as Lego blocks on a plain, identify the urban landscape of the district —at the same time, I might add that, such assembly is linked to the creation of each piece of this work as were previous artistic productions—. And with the artists came the galleries, and with these came great art collections such as the Rubell Family Collection or the Cisneros Art Collection, which along with “homeless” would witness how peculiar individuals in limousines and luxury automobiles began to stopover to visit the studios, the collections, and naturally the various art galleries. Such setting bounds Hoyos’ perception sharpening his ever-ready eyesight upon the plurality and triviality that are implicit in each of our interactions with the city, in space arrangement and in the diversity of habits that gives them life. Here evidence shows the onset of a synchronism of very few variables that happen full of a transforming force, concurrently creating a “Non-Place”2, a space feasible only out of an artist’s creative ability.

Miami encloses a common ideal of a reachable American Dream, at least for those of us who are downstream on the Rio Grande. Ironically, this populated urban zone with an astonishing high growth-rate has been affected by the world’s economic depression triggered by the American Real Estate sector and its open credit system. Accordingly, from Juan Raúl’s home, downtown Miami, to his studio in Wynwood, there emerge huge rent or sale signs ﬁxed to colossal buildings that rather seem to be full scale models or even more, interrupted architectural projects as in a never-ending stack of ﬂoors like a Jenga game: assembling blocks repeatedly layer after layer facing the challenge not to let them stumble, until: thud!…

The idea that comes out in front of such a landscape is that of an unreﬁned picture that denotes the contravened infallibility of the gringo system and consequently the breakage of the never-ending summer dream. Nonetheless, change, natural origin of crisis, implies opportunity: here there is another founding element that nurtures the pictorial production of artist Hoyos. Large pieces of cloth intervened layer after layer with no disruption, doing an exercise of block construction (like the long blocks of warehouses in Wynwood, or endlessly storied-buildings in Miami), materialized by applying primary technical approaches of folk graphics inherited from conventional advertising by pop art, set themselves up for being socio-political documents that rummage around in the middle of a social restructuration. The fact that art deals with social and political ﬁelds is a done deal, though to have such a concern expressed out of a painting that has skipped the easy way towards ﬁguration, becomes a matter that merits a deeper consideration. Malevich³ Suprematism exalted the autonomous power of paintings and accordingly decreed, as if it were a manifesto, the absolute in perception. In relation to which, Pictográﬁca arrives to the palimpsest4, in a role of a lucky encounter rather than as a premise for starting. Through the addition of layers that contain images captured and manipulated from its origins by the artist, the present as a whole is shaped. The basic graphic information is made up of cityscape photographs, carefully sorted from a vast personal ﬁle they undergo a purge process to select solely useful elements that would deﬁne a constructive model, its own brick to re-shape a particular vision of the city.Bogotá, New York, Medellín, and Miami are the four cities embraced in Pictográﬁca, each one having been dealt with an independent logic that matches the artist’s own experience in each of the cities, which results in an art proposal clearly self-referential. Every art piece conﬁnes the spirit of the places chosen: the color, the warmth of environs, the variety of urban dynamics, as some of the key aspects necessary to understand and feel the results of this abstract.Pictográﬁca exhibition reinvigorates art tours as a living experience, since it discloses spaces that invite the viewer to live it with all the senses: Hoyos presents to us a variety of levels in an essentially contemporary exercise; in the ﬁrst instance, paintings on canvas in three different formats, being this level the core and the container, paintings play the role of the skin in the organism; as skin of the city. In a second instance, a selection of drawings “The Transparent City”, a series of notes of reasoning about vagueness and confusion, though at the same time deﬁnitive and radical, of the city as a vital space. Finally is “Exit”, a sound space, a complex installation built from a Workshop, a collaborative project accomplished with students from various Art Colleges of Medellin.A tour through the cities of America in graphic, abduction, and replication clef, being self-referenced and self-reinterpreted from their own components, minimal perhaps, however radical constituents. An art proposal that speaks out of the constituent power of art, as well of its ability to confront, and recreate a world and a number of worlds, which after having been fundamental, become ephemeral, come to an end to continue an endless return, in a permanent movement, like that of Wyndwood; which after having been reborn to constitute the habitat of artists that rediscover and reinterpret it, is expelled today in terms of dollars, taken by the earth, in that crazy roulette of transient estimates so characteristic of that “promissory land” where buildings are, literally, big models that rise up as if worshiping the sun, in that interplay between ephemeral and vanity.